Periodontics deals with the prevention, diagnosis, and treatment of inflammatory disease that affect the supporting structure of teeth (periodontium) - gums, alveolar bone, cementum, and the periodontal ligament.

Gum disease (periodontal disease) is the most common cause of tooth loss. It destroys the teeth’s supporting structures, without which they become loose and eventually fall out. Gum disease is most commonly caused by dental plaque which forms due to poor oral hygiene (other factors such as genetics, tobacco use and medical conditions such as diabetes can also cause it). Gum disease is usually painless and can remain undetected until it’s too late. 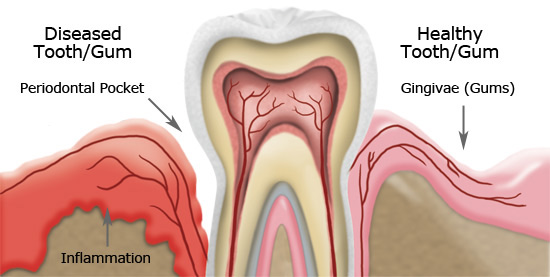 At Sri Sai Kirupa Dental Clinic, we diagnose periodontitis by inspecting the soft gum tissues around the teeth using a special probe and by evaluating the patient's X-ray films to determine the extent of bone loss. Periodontal treatment for periodontitis involves root surface debridement (the removal of damaged tissue), and regenerative procedures (to regenerate some of the lost bone and tissue) which are surgical procedures such as bone grafting and soft tissue grafts.

Furthermore, we can even use Concentrated Growth Factor (CGF) therapy in treating periodontal disease as it helps reduce pain and swelling which in turn enhances the healing process.

All gum diseases (even dental cavities) are primarily caused by dental plaque — a colorless mass of harmful bacteria that grows on teeth when food interacts with bacteria normally present in the mouth. After 48 hours of growth, these bacteria release toxins that inflame the gum tissue which is the start of the process that leads to gum disease. Plaque re-forms quickly and hence requires daily removal. Hardened dental plaque is called tartar (which is pale yellow or brown in color) and is difficult to remove requiring professional dental cleaning.

Gum disease is usually painless and can go undetected until it’s too late. It goes through two stages: